On September 9th, Apple Inc. introduced the world to their latest smartphone – the iPhone 6 – and their latest invention, the iWatch.  Since their introduction, there have been over 4 million pre-orders of the iPhone 6.   Apple has projected that approximately 5% of current iPhone users will also purchase an iWatch.  With all the hype around these product’s launches Apple’s stock must go up, right?

In fact, Apple Inc. usually sees a devaluation of their stock after an iPhone launch.  When the first iPhone was released in 2007, within a month apple stock had dropped 9.28%, and the same thing has happened to every new iPhone launch since then: 3GS -9.11%; iPhone 4 -16.17%; 4S – 15.98%; and the iPhone 5 with a -24% decrease in stock price.
Still, with a negative trend occurring during the initial release of products, the Apple stock always seems to be on an upward trend overall.   So the question becomes what causes apple stock to decrease post-announcements?  It does not seem to be a timing issue as when apple introduced the iPhone 4S – as seen in the chart below – the market was seeing overall improvement at that time.  While there are not many explanations for the plummet of stocks after product releases, Samsung seems to have a very similar trend.  The release of the Galaxy S saw Samsung’s stock dip 5% within a quarter.  The same trend continued with the Galaxy II – where there was a 21% decrease in the company’s stock price – and the Galaxy IV with a similar decrease of 19%.

Thus, it seems this is a common trend for both smartphone companies.  The only two realistic reasons are:  Traders are just gaming the system and selling high which causes an eventual dip in the stock price, before the market eventually corrects itself in the long run; or these small dips can be seen as a result of apple not making their expected quotas on sales, which has led to the correcting of the stock price by the market.   A lower stock price, which better reflects the actual sales revenue of the company, is the final result.

Overall, with the 4 million preorders for the iPhone 6, we will have to wait and see where the apple stock will land after the eventual hype wears off.  Will it follow the downward trend that other iPhones have faced? Or will it see some initial success?  Currently Apple stock started at $105.00 in anticipation of the iPhone 6 introductions and has fallen by 4 points.   It seems as though history is likely to repeat itself. 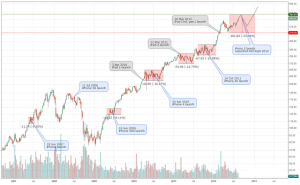