The Federal Reserve and other major central banks are under pressure to reduce their balance sheets, but doing so poses a risk of provoking another taper tantrum of epic proportions. If major world banks in the U.S. Europe and Japan don’t properly coordinate and execute the unwinding of some $13 trillion in assets built up since 2008, risk assets including stocks and mortgage-backed securities could sell off in a fire sale that would leave many investors – large and small – burned. In the worst-case scenario, the economic recovery, which is looking robust for the first time in a decade, might be at risk.

Following the financial crisis of 2008 that marked the start of the Great Recession, central banks around the world engaged in monetary policy efforts to stabilize their domestic and the global economy. Unorthodox policy tools such as quantitative easing (QE) allowed central banks to purchase riskier assets, including mortgage-backed securities (MBS) and other non-government debt. Many experts believe that these asset purchases stabilized markets and bolstered the financial sector, keeping the recession from growing any deeper. The result, however, was that central bank balance sheets ballooned. The Fed’s balance sheet grew from just under $1 trillion in assets in 2008 to $4.5 trillion in 2017. According to Bloomberg, the Bank of Japan’s (BoJ) assets also quadrupled while the ECB’s grew by a factor of eight. 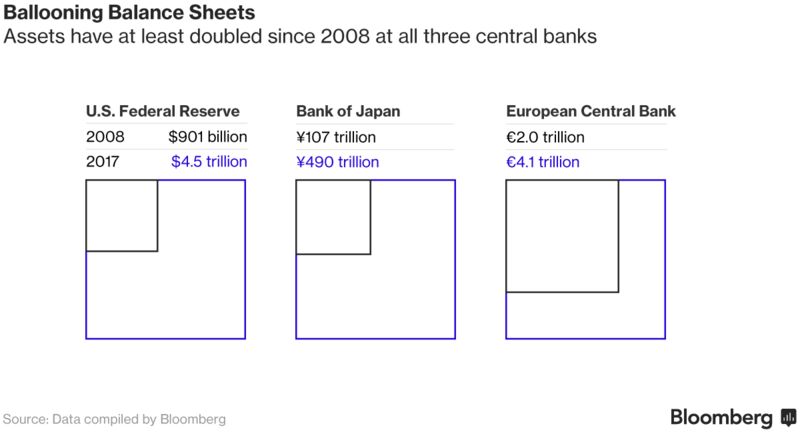 In Japan and Europe, the central bank purchases included more than various non-government debt securities. These two banks actively engaged in direct purchases of corporate stock in order to prop up equity markets, making the BoJ the largest equity holder of a number companies including Kikkoman, the largest soy-sauce producer in the country, indirectly via large positions in exchange traded funds (ETFs).

Unwinding, or tapering these enormous positions is likely to spook the market since a flood of supply is likely to keep demand at bay. Moreover, in some more illiquid markets, such as the MBS market, central banks became the single largest buyer of those assets. In the U.S., for example, with the Fed no longer a buyer and under pressure to sell instead, it is unclear if there are enough buyers at fair prices to take these off the Fed’s hands. The fear is that asset prices will collapse in these markets, creating a more widespread panic. If mortgage bonds fall in value, the other implication is that the interest rates associated with these assets will rise putting upward pressure on mortgage rates in the market and putting a damper on the long and slow housing recovery.

One strategy that can calm fears is to allow certain bonds to mature and refrain from buying new ones, rather than outright sales in the market. According to Bloomberg, “Fed officials’ current game plan is to start the balance-sheet run-down with a phasing out of reinvestment in maturing securities. The central bank will have $426 billion of its Treasuries mature in 2018 and another $357 billion in 2019.” But even with phasing out purchases, the resilience of markets is unclear since central banks have been large and consistent buyers. In Japan, it is unclear how equity markets will react if the BoJ ceases ETF purchases. Bloomberg cites Japan’s federal government pension plan as a potential receiver of these ETFs to fund its pension obligations as a “market-friendly solution,” but only time will tell if this $13 trillion elephant in the room will fade away silently or make an undue ruckus.