Why This Earnings Season May Be the Best Yet For Stocks

The third quarter earnings season typically gives a significant boost to stock prices, CNBC reports. Using analytic tools developed by Kensho Technologies and typically deployed by hedge funds, CNBC found that the S&P 500 Index (SPX​) posts an average gain of 2.29% in the 30 days following the start of the third quarter earnings reporting season. This is based on the last 19 years of data, during which the S&P 500 advanced 15 times (79%) in that period following the first release of third quarter profits.

Looking at the S&P’s industry sectors, information technology, industrials, materials, and financials showed similarly strong upward bias at this time of year. The tech sector has posted an average return of 4.6 percent, double the average return of the S&P 500, in the 30 days after third quarter earnings season starts, according to Kensho, per CNBC.

Among the four quarterly corporate earnings reporting seasons, the third quarter is the one with the best average stock market performance, based on the Kensho-CNBC analysis. At the other end of the spectrum, the fourth quarter tends to be the worst. During that earnings season, the S&P 500 has been down 53% of the time, with an average loss of 1.12%. Rounding out the reporting year, the first quarter tends to be up, while the second quarter usually is down, per CNBC. 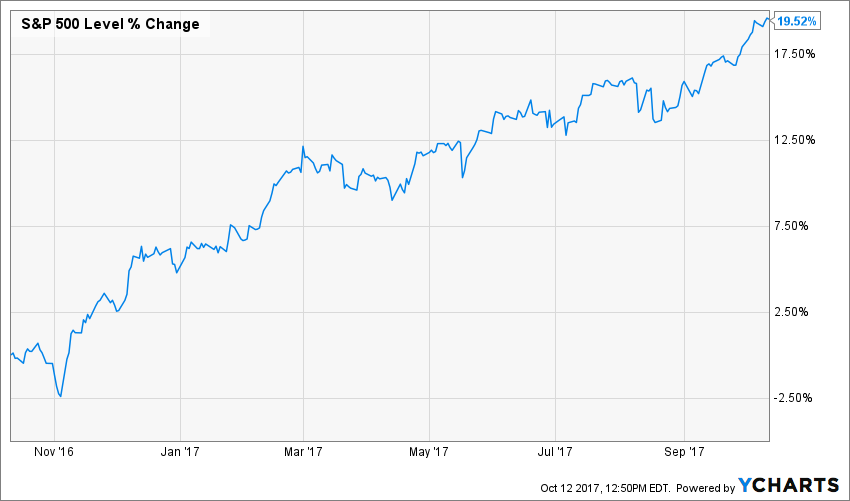 Setting aside recent historical trends, there are some fundamental reasons for investor optimism as the current earnings reporting season gets underway. For one, JPMorgan Chase & Co. equity strategists are predicting that Q3 EPS for the S&P 500 will hit a record $33.75, beating estimates by roughly 4.5%, CNBC indicates. “We are expecting another solid earnings season for S&P 500 companies…,” wrote Dubravko Lakos-Bujas, JPMorgan’s head of U.S. equity strategy, according to CNBC.

Additionally, despite moves by the Federal Reserve to raise interest rates, they nonetheless remain low by historical standards, and this should give stock prices continued impetus, the Wall Street Journal reports. Also, corporate credit ratings are improving, with 42% fewer downgrades and 10% more upgrades so far in 2017 versus 2016, the Journal notes, citing data from S&P Global Ratings. Meanwhile, for energy companies with speculative bond ratings, their default rate has dropped from 3.5% in July to 3.3% in August as oil prices have stabilized, the Journal adds.