Shale Oil, Oil Shale, and other Common Terms in the Unconventional Oil Supply

The shale revolution has changed the game in the energy market. The increase in the oil supply from “unconventional” methods, and particularly from the US, has also complicated the role of traditional players like OPEC. In this article, I review the terminology of unconventional supply, including the idea of “shale band” which has worked since 2015 as a framework in analysis of the dynamics of the oil market.

But a more restricted definition of “unconventional” production limits this term to the extraction of oil and gas from “low permeability” rocks. According to the Alberta Energy Regulator (AER), in these rocks “the pores are poorly connected” and the oil and gas cannot easily flow through the rock. Based on this definition, the AER considers only “tight oil” as the unconventional oil, while “oil sands” (see below) are not regarded as unconventional. The AER also refers to “tight gas”, “shale gas” and “coalbed methane” as unconventional gas. Nevertheless, other sources, including some Canadian sources, still refer to the oil sands as “unconventional” supply.

Tight oil, sometimes called “shale oil”, is a major source of unconventional supply of oil. Tight oil is extracted from “low permeability” formations with the help of “hydraulic fracturing” method. The IEA considers “shale oil’ as a subset of tight oil. Tight oil or shale oil should not be confused with “oil shale”.

The name of “oil shale” is a little misleading as it doesn’t actually contain oil, “but rather a type of organic matter called kerogen, a precursor of oil that is converted to a type of crude oil when heated to about 450 – 500° C”, according to the U.S. Geological Survey.

The AER defines Oil Sands as “a mixture of sand, clay, water, and bitumen”. Bitumen is basically an extra-heavy crude oil that needs some treatments before being extracted and then upgraded to lighter products. According to the Canadian Association of Petroleum Producers (CAPP), the steam-assisted gravity drainage (SAGD) is a common technique. With SAGD, the steam is pumped “underground through a horizontal well to liquefy the bitumen that is then pumped to the surface through a second well.”

The term is reportedly coined by Oliver Jakob in May 2015. As the director of Petromatrix, a Swiss based consultancy company, he basically suggested that the WTI benchmark would likely to remain within the range of $45-$65 per barrel because of the economics of petroleum extractions in the US, specifically the “hydraulic fracturing” method. Based on his idea, a price below $45 would result in a sharp decline in supply while a price above $65 would raise the supply significantly. In August 2016, he lowered the range of the shale band to $40-$60.

As the chart below shows, the shale band worked relatively well since its introduction in 2015. A big assumption of the shale band is that the US shale oil industry takes the role of the swing producer from OPEC, and particularly from Saudi Arabia. This may change however. The OPEC is still able and has incentive to set a target and resume its role as a swing producer again; probably by accepting a decline in their market share. 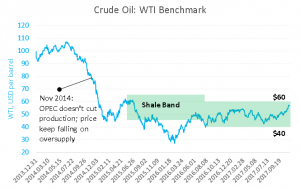