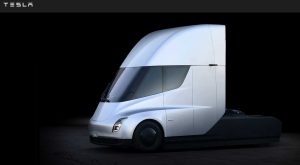 “Tesla Semi”, an electric semi-truck that would start production in 2019. Image from Tesla’s website.

Tesla is more valuable than Ford or Nissan, at least based on market capitalizations. These carmakers live in very different worlds. Tesla, run by the iconic entrepreneur Elon Musk, is still a loss making but fast growing company while its rivals are mature companies, some with nearly a century of experience and billions of dollars of net profits. Tesla’s near-term ambitious goal is to produce around half a million cars in 2018 while Ford sold over 6.6 million cars in 2016. But why should Tesla be more valuable? This is a natural question to ask and finding the answer is not easy if you are looking for evidences and not just narratives. In fact, Tesla is often regarded as an example of “story stock” whose value depends on the stories about the future of the company and the industry.

Tesla: Apple of the Car Industry?

Tesla’s fans, and those who hold its shares in their portfolios, argue that Tesla is not a typical car-maker but an innovator that has changed the game in the automotive industry. A more popular term, especially for the media coverage, is the “disruptor”. They point not only to Tesla’s achievements in batteries technology or autonomous vehicles, but also to Tesla’s potential for “integration”. For example, Tesla would be able to offer ride-sharing to its customers via Tesla’s network, allowing them to make money from their investment in Tesla’s cars. In summary, they see Tesla as Apple of the car industry. This narrative allows them to believe that Tesla could make more money from its brand, customer royalty, and new businesses.

The Other Side of the Coin

Not everyone agrees with that narrative. Brent Goldfarb, associate professor of management and entrepreneurship at the University of Maryland, is one of them. Brent questions even the idea of calling Tesla a disruptor. In an article titled “Why Tesla is overhyped — and overvalued” in Vox.com in August 2017, he identifies four “bets” that Tesla is making and he argues that none of them are promising. They are: “the [Electric Vehicle] EV bet, the autonomous vehicle bet, a software-platform-in-a-car bet, or the clean-energy-and-battery-company bet”.

For example, in the case of EV bet, other companies are either producing electric cars or preparing to flood the market with new models in near future and if they see sufficient demand. More importantly, Tesla needs to produce millions of EVs to justify its valuation and this has two implications: First, production at scale needs experience in supply chain while Tesla’s track record suggests that it often underestimates the challenges in mass production and misses its own production targets. Second, with mass production Tesla enters the area of low-price cars where it will face intense competition. In fact, Tesla Model 3, which would bring the company to the club of mass producers, starts from $35,000, which is nearly half of the current luxury models.

A main point in Brent’s argument is the ability of rivals in “replicating” Tesla’s business model and technologies. For instance, in the autonomous driving area, Tesla apparently has advantage because it was gathering a lot of data from its cars for years that can be used to feed and train machine learning algorithms. However, rivals are quickly developing their own technologies while they can also get access to this technology via tech companies like Google. The idea of ride-sharing service is also replicable.

Aswath Damodaran, professor of finance at NYU Stern School of Business, is known as the “dean of valuation” for his expertise in valuation of companies. Damodaran has a valuation model for Tesla as well. His estimate for Tesla’s share price was about $192 in August, well below the market price of $365 at that time or even the closing price of $315 this week. Damodaran’s valuation model is basically simple, actually a two-stage discounting cash flow model. Damodaran’s inputs for his estimate also comes from his own story: he sees Tesla as an auto/tech company. It means, Tesla would be a car maker but it would enjoy higher profit margins which is often associated with technology companies. However, discounting cash flow models are generally very sensitive to the inputs. You can download Damodaran’s spreadsheet from his website and see that with small changes in Tesla’s revenue growth rate or profit margin you can virtually end up with any price, including the current market price.

Damodaran also explains that it is impossible to separate Tesla from Elon Musk. From that perspective, the buy or sell decision depends on investors’ faith in Musk’s ability to deliver on his promises. Tesla’s share price is nearly 20% lower than its record high, mainly because of missing its production target for Model 3. And to support the share price, it seems either Tesla should improve its production capabilities or Elon Musk should keep investors motivated by new stories.