Yield on Chinese 10-year sovereign bond soared from 3.65 in early October to just above 4 percent in late November before trimming part of its increase. From the early days of the sell-off, investors were asking if this is a global issue or not.

Some analysts believe that it is a global issue and other markets will eventually follow China. Sean Darby, chief global strategist of Jefferies Group, points to the rising yields in China as an “early warning signal” to the global bond market, Bloomberg quoted on November 28. Darby argues that global bond markets will follow this trend as they start factoring the tightening monetary policies around the world. He also expects China to export its inflation to other countries which would contribute in the global bond sell-off. Inflation is often viewed as the number one enemy of bonds as it quickly erodes the value of future cash flows.

At the same time, there are reasons to believe that the recent decline in price of Chinese bonds has been more a domestic issue. The timing of rising yields was coincided with China’s National Congress of Communist Party in October where President Xi Jinping pledged to deepen the economic and financial reforms. Financial reform in China generally means deleveraging and higher discipline in lending. In China, debt market was generally assumed to be riskless until 2014 when the government allowed a solar company to default on its debt, which was reportedly the first corporate default in China. China tries to limit irresponsible borrowing and lending practices and this policy shows itself in decline in liquidity and eventually in rising yields.

Country specific factors in other countries

The charts below compare the yield on 10-year government bond in China with that of the US and three other emerging economies with large amount of debt: Brazil, India, and Mexico. While one may see some co-movements in yields, the divergences that are linked to different stories in these countries should not be ignored. For example, in Brazil yields were falling as the country was struggling with recession and steady decline in inflation rate. Brazil’s central bank is expected to cut rate while many of its counterparts around the globe are thinking about tightening policies. In India, increase in price of oil, which may fuel inflation, is said to be a reason behind the rising yields. In Mexico, the recent earthquake was an inflationary shock while the country also faces uncertainty over NAFTA negotiations.

While the recent increase in Chinese yields seems to be more a local issue, it doesn’t prevent us to think about global factors that may trigger a sell-off in global bond market. Deleveraging and inflation are probably the two most important risks. In the case of deleveraging, the Fed has just started to unwind its balance sheet, a policy that may be followed by other major central banks, namely the ECB. And if yields rise in developed markets, emerging markets may have to raise interest rates to defend their currencies. This is not a new risk however and not everyone agrees on the final outcome of this new trend. In fact, some analysts and central bankers argue that yields can remain low even with a normalizing policy.

This argument is usually based on this assumption that the Fed and other central banks would make their actions predictable and they could also adjust the pace of normalizing to prevent any disruption in financial markets. One factor that could complicate this calculation is the risk of unexpected increase in inflation. From this perspective, investors are expected to be more sensitive than ever to any sign of rising inflationary pressures. Nevertheless, as long as the risk of a widespread global inflation is low (e.g. crude oil capped at around $60), they are likely to focus on country-specific factors. 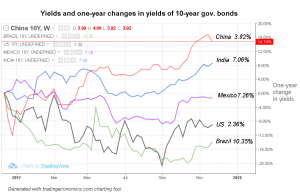 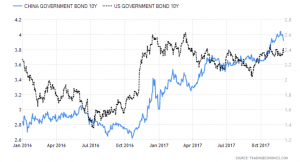 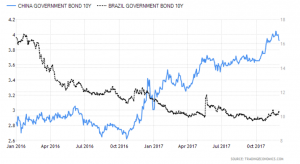 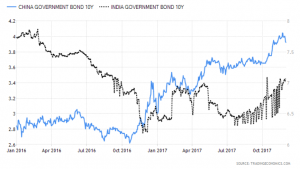 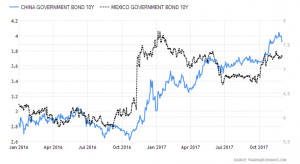