Wage growth has been generally slow in recent years despite the declines in the unemployment rates. Low wage growth has important implications for all investors as it affects expectations about inflation and interest rates. Specifically, nearly a decade after the Great Recession, central bankers are trying to normalize the monetary policies while the pace of this normalization process is highly dependent on signs of emerging inflationary pressures, especially from higher wages. In their views, inflation from changes in commodity prices or exchange rates are often temporarily and transitory, while inflation from fast rising wages could last longer as it suggests that the economy has passed the full-employment level and is probably working above its potentials.

The IMF has recently looked into the drivers of wage growth and their findings were published in the second chapter of the October 2017 World Economic Outlook. As the charts below show, in the advanced economies the headline unemployment rates have returned to pre-Great Recession levels but this is not the case for the nominal wage growth. Based on the IMF study, we can identify two groups of factors behind this trend: cyclical and non-cyclical factors.

The IMF points to the excess supply of labor as a cyclical factor, which may not be visible in the headline unemployment rate, so we need to look to other indicators. For example, the number of hours per worker has steadily declined, and this trend started before the Great Recession. A similar indicator is the “involuntarily part-time employment” as a share of total employment. This indicator is still at elevated levels and could reflect weak demand in the economy as the employers are not confident enough to hire those workers on a full-time basis.

Decline in productivity growth and on-going automation are two examples of non-cyclical factors that are probably playing a role in lowering wage growth. Decline in productivity growth, or the output per hour worked, could reduce the incentive/pressure for raising wages. Automation also reduces the relative price of investment goods compared to the labor, which in turn limits the wage growth. However, the IMF thinks that automation was not a main contributor in the low wage growth after the Great Recession.

There are also other factors. In a September report from the Brookings Institute with a focus on the US job market, they pointed to factors such as the globalization, technological changes, and offshoring of labor-intensive jobs that put downward pressure on wages.

The pressure on wages is high, and to a great extent non-cyclical, and this dampens expectations for a reversal even for economies that are close to their full capacity. Some factors, such as the automation, are likely to put an even greater pressure on wages. The only factor that has a chance for a reversal is probably globalization. Such a reversal, if happens, could have a positive impact on local wages at least in the nominal terms.

At the same time, it is important to consider the off-setting factors that help to put more money in the hands of families without any direct increase in wages. Fiscal policies such as tax cuts or increase in transfer payments are typical examples. A recent case is the proposed tax reform in the US which includes tax cuts for some low-income and middle class families. The eventual effect of such a reform is highly complex. As the chart below shows, one market measure of inflation which is the difference between 10Y US treasury and 10Y inflation protected treasury, has increased in 2017. The increase suggests that either investors expect higher inflation rates or they are less confident about their expectations. 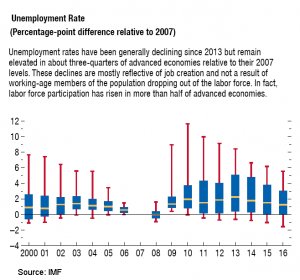 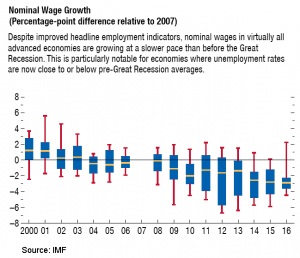 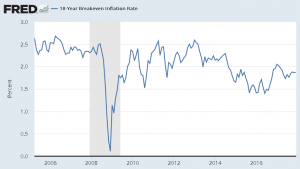