Canadian and US markets pushed through all-time-highs once again this week. The DJIA, S&P 500 & NASDAQ index gained  2.77%, 2.85% and 3.5%, respectively, while the TSX composite ended 1.9% higher. Canadian markets had their best weekly gain in 6 months alongside the US who had their best week in 5 months, despite the growing global concern of the coronavirus. Increased focus on the outbreak is slowing the macroeconomic projections and possibly signalling a recession. While the North American markets were able to overlook the impact of coronavirus, international markets saw quite a bit of volatility. The main Chinese index, the SSE composite, dropped as much as 9% on Monday as the coronavirus has forced the Chinese government to put millions of people on lockdown.

Tesla common stock (NASDAQ: TSLA) saw extreme volatility last week with the stock going parabolic over the last few weeks. Closing the week at $748.07, which was up nearly 11%. However, on Tuesday the stock hit highs of $960 before correcting. The stock is now up 55% in one month, 73% YTD, and over 300% since its lows in June. There were multiple drivers for the stock to appreciate, however, the stock rising to nearly $1000 last week is believed to be a massive short squeeze. The short interest on Tesla stock has always been high, peaking at around 33% of the total equity float in June. The stock still sits around 17.55% short interest.

Opinion – Divesting out of China

The coronavirus and tariffs may cause companies to divest out of China and move their supply chains back to North America. A large amount of North American companies rely on China at some stage of the production process, and operations are being threatened. During last year’s trade war between China and the US, many supply chain nightmares emerged forcing companies to slowly decrease their dependence on China. Now, we still only have phase 1 of the trade deal, and the coronavirus has once again created nightmares for companies. Factories are shutting down, and stores are being closed all over the country. Starbucks (NASDAQ: SBUX) has already temporarily closed half of its locations in China. The timing of these two conflicts could be strong enough to cause companies to rethink their reliance internationally. With increasing automation technology becoming more available, it also makes sense to move production to North America. Increased automation has actually helped bring back jobs from overseas. Seen in the chart below from Statista, manufacturing jobs are slowing coming back to North America. This trend is likely to continue, and possibly at an accelerated rate if trade tensions and virus outbreaks continue to cause issues internationally. 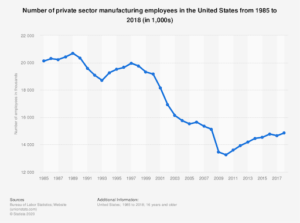